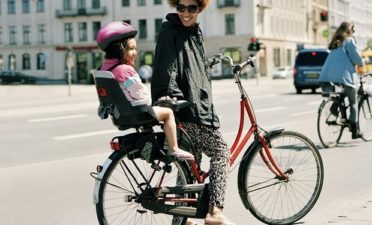 Why so many Danish women are opting to become single mothers

More and more women are deciding to start families using donor sperm, rather than waiting for the right man to come along.

‘Everyone has a dad,’ I heard my son’s friend telling him the other day, ‘Nope: not me,’ was his response,” says Anne Patricia Rehlsdorph, 45, a lawyer from Copenhagen. “He’s seven now but he has known since he was two that he’s a donor baby and our ‘family’ is just me and him. Solo parenting can be hard, but it’s also fantastic. I wouldn’t have it any other way.”

Growing number of solo moms
Rehlsdorph is one of a growing tribe of elective single mothers or “solomor” in Denmark, where one in 10 babies conceived with donor sperm is born to a woman without a partner. “It’s a trend we’ve really seen growing since single women were offered free fertility treatment in 2007,” says Karin Erb, lab director at the fertility unit of Odense University hospital. Researchers collected the personal data of single women undergoing assisted reproduction at public and private clinics for the first time last year. “And, as Denmark has the highest number of births by assisted fertility treatment in the world, these solomor represent a significant number,” says Erb. “Everyone knows someone who’s a solomor or thinking of becoming one.” Sperm banks have also noticed a rise in demand from single, heterosexual women. “Around 50% of our clients are now single,” says Ole Schou, director of Cryos International, the world’s largest sperm bank in Aarhus, Jutland. “We’re seeing an avalanche of educated older women – 85% are aged between 31-45 and half have masters degrees or higher. More and more of them are going it alone and we predict that by 2020, 70% of our clients will be single.”

Plan B
But becoming a solo parent isn’t in most women’s game plan. According to a study by Copenhagen’s University hospital, 90% of women surveyed in the country’s nine public fertility clinics wanted to have a child with a male partner. “The majority say that becoming a solomor was Plan B,” says Lone Schmidt, associate professor at the University of Copenhagen Department of Public Health: “Two thirds had been in a relationship and wanted to become pregnant but their partners weren’t ready.” The average age of couples seeking help for fertility problems in Denmark is 33, and the average age of single women is 36. “In other words,” says Schmidt, “women are waiting it out, and when it becomes clear that there isn’t going to be a man in the picture, they’re taking action themselves.”

All the though questions
This was what happened to law graduate and therapist Signe Fjord, 41, from Frederikssund: “I’d always dreamed of having three or four kids but the man I was in a relationship with in my 30s wasn’t ready. I met other men who mostly seemed to be interested in their careers – or their PlayStations – so I began to lose faith. I wasn’t anti men: I adore men! I just couldn’t find one who wanted kids. I saw lots of friends choose to become pregnant with boyfriends they knew wouldn’t last – purely because the desire to have a child took over. I also saw ‘traditional’ families breaking up all around me, so I thought, ‘Maybe I should just make this happen on my own.’” Fjord asked herself, “all the tough questions”: “Does the world need more people? Couldn’t I adopt?’ And I looked into it, but adoption is practically impossible in Denmark as a single woman, and it’s very expensive. Plus I had this primal urge to have my own child. I thought about having a baby with a friend, but realised this could get complicated. I considered a one-night stand – not a big deal in Denmark – but felt this would be somehow dishonest, stealing sperm from someone. This left donor conception. Everyone I talked to was really supportive, apart from my dad who found the idea weird at first – as though it was negating the role of ‘fatherhood’. But I went for insemination, got pregnant and in 2012, gave birth to a baby girl. And as soon as she was born, my dad couldn’t do enough for her – he loved being a grandfather.”

The new family unit
Tine Buur, 41, a teacher from Copenhagen and solomor to two children, aged four and nine months, had a similar experience. “My dad was funny about me using a donor at first – he’s from an older generation and I think it made him feel a bit redundant, as a man. But my sons and I created our own family unit. There’s no stigma. Families come in all shapes and sizes in Denmark.”

Society accepts and supports you
This is an understatement. Researchers recently categorised the different family types in Denmark and found that there were 37 – from solomor to lesbian couples and various blended families. Denmark is famously family-friendly, with 52 weeks’ paid parental leave for a new baby and a generous welfare state paying three-quarters of the costs of childcare , enabling 85% of mothers to return to work. “It’s easier to be a solomor in Denmark than elsewhere because society accepts and supports you – we’re pretty liberal about most things,” says Erb.

But it’s not just Scandinavian liberalism behind Denmark’s solomor statistics. Danes are also delaying adulthood, according to researchers. “Society now decrees that you can still be a teenager in your 20s and many Danes study until they’re 30,” says Erb. “Then you need to invest a few years in your career and before you know it, you’re 35. For years, politicians told young people: ‘Put your studies first and then start a family.’ But it’s getting too late for many women.”

This theory rings true for Pia Crone Christensen, 40, an academic from Copenhagen. “I spent my 30s doing a PhD in neuroscience and just didn’t meet a man I liked who wanted kids,” says Christensen, “so I started to think about becoming a solomor.” After IVF using donor sperm, she became pregnant and is due to give birth in November. “My child won’t have a father,” says Christensen, “but lots of people grow up without a dad – my parents divorced when I was five. You never know how life will turn out.”

Christensen, Rehlsdorph, Fjord and Buur all spent years researching the pros and cons of single parenting and its impact on children before starting treatment. “It was something I was concerned about,” says Fjord, who wrote a book about becoming a solomor with Rehlsdorph, “but actually, studies show that children born to elective single mothers perform slightly better in tests than other children – and better than children of mothers who are single through divorce.”

Modern Families
Professor Susan Golombok of the Centre for Family Research at Cambridge University and author of Modern Families: Parents and Children in New Family Forms, thinks she knows why: “The traditional idea that children of single parent families don’t do so well is based on single mothers bringing up children after divorce or an unplanned pregnancy. These women typically experience a considerable drop in income, which can cause problems for children as well as stress for the mother. ‘Unelected’ single mothers are more at risk of mental health problems, because of the stress of splitting up or financial anxiety, and often face conflict with their former partner, which can impact on children. But single mothers by choice are spared all this,” says Golombok.

Quality of parenting
Of course, the children of solomor may face other issues – like not knowing the identity of their donors. But Golombok’s research suggests that this needn’t be a problem if they’re told about how they were conceived early enough. “In terms of a child’s psychological wellbeing, research so far suggests no difference between children of single mothers by choice and children with two parents in terms of child adjustment,” says Golombok. “What’s more important is the quality of parenting as well as financial and social support.”

Education about infertility
Denmark’s financially secure solomor also benefit from strong social support networks that meet regularly to share experiences and parenting dilemmas. “There’s a great solomor community,” says Fjord, “and I’m happy – though sometimes I feel like it shouldn’t have to be this way. That I shouldn’t have to work so hard, on my own.” Lone Schmidt, a public-health professor at Copenhagen University, agrees: “These women appear to do an amazing job but the situation isn’t sustainable. Denmark’s birth rate is just 1.9 – it should be 2.1 – so we need to educate men that if they want children, they need to get on with it while their partner still has time.” Work is underway, with Denmark’s minister for education and the minister for health launching a programme to teach high school students about fertility problems. “It’s a crucial change: a complete switch from ‘don’t get pregnant’ sex education to educating kids about infertility,” explains Schmidt. “Next, we need to start recommending that people start families while they’re still studying – encouraging universities to be more flexible; allowing part-time attendance or parental leave.” Won’t women’s job prospects suffer if they’re grappling with small children while trying to finish degrees and get on the career ladder? “Not if men and women realise they have to play a part,” she says: “Denmark has the highest employment rate among mothers in the world – we have the day care, we have the welfare state – it shouldn’t harm women’s careers to have their children a little earlier.”